In rural areas in Brazil there are no public sewage systems and it is very common that sewage and waste water is either dumped into rivers or into one open septic tank (basically a hole in the ground) which leads to soil and water contamination.

We at MAARA wanted to create a system that does not allow any harmful waste reaching the river or drinking water. After quite some research we opted to

The BST is a closed water treatment system for black water (water from the toilets). The system does not give any pollution to the soil, surface water or groundwater.

The black water is lead to a closed impermeable basin in which the human waste is decomposed via a process of fermentation by bacteria in the lower part of the system, the part in between the tyres and the holes within the rocks/tiles. As the basin is completely closed the harmful pathogens cannot leave the system.

The water in the system cannot leave and will raise through the different layers of small stones, sand and soil within the system and will become 99% clean.

In order to get the water out of the system plants with big leaves, like banana plants, or Taioba plants will evaporate the access of water into the atmosphere.

If designed correctly the system will never overflow, will not smell at all and will not have any contamination to the surroundings. At the same time, it will even give us tasty bananas to eat, which are 100% safe from any contaminants that may be in the sewage (scientifically proven).

See below two pictures how the system looks like:

The banana circle is used to treat our grey water. This is water coming from showers, kitchen, washing machines etc, as long as it does not come from toilets. The water is basically dumped into a big hole in the ground which is filled with a lot of organic material (from big trunks in the lower parts to smaller twigs and grass on the top). Around the hole banana trees and other plants with big leaves are planted in order to evaporate the excess of water into the atmosphere.

A note should be made that for either the BST and Banana circle we should avoid using chemicals or other toxic substances like chlorin in the water, to avoid killing the microorganisms in the system.

Construction of the BST and banana circle

First of all, the location of the BST is important and must be in a sunny spot. This to allow the banana trees to be most effective doing their photosynthesis and evaporate water into the atmosphere.

To calculate the size of the BST we calculated with approximate 2 m3 per person that will be using it. In our case with a family of 4, 5 volunteers and sometimes people in our accommodation we used 12 people as a base, hence the BST needed to have a size of 24 cubic meters. The tank sizes became 5m long, 3m wide and 1,5 meter deep.

This is a big tank, hence we dug the holes for the BST and the Banana circles with the help of a digging machine.  After that the construction of the floor and walls began, making sure everything is strong and watertight in order to avoid any leakages. From the inside the walls were plastered with a watertight layer.

The next step was filling the BST which was done in one day of hard labour! See also the pictures below;

Now the tank is full with all its required layers, we started panting the banana trees and other plants that have big leaves in order to be able to evaporate lots of water into the atmosphere. We planted the banana trees around 1 meter from each other and then covered the soil very good with lots of organic material. 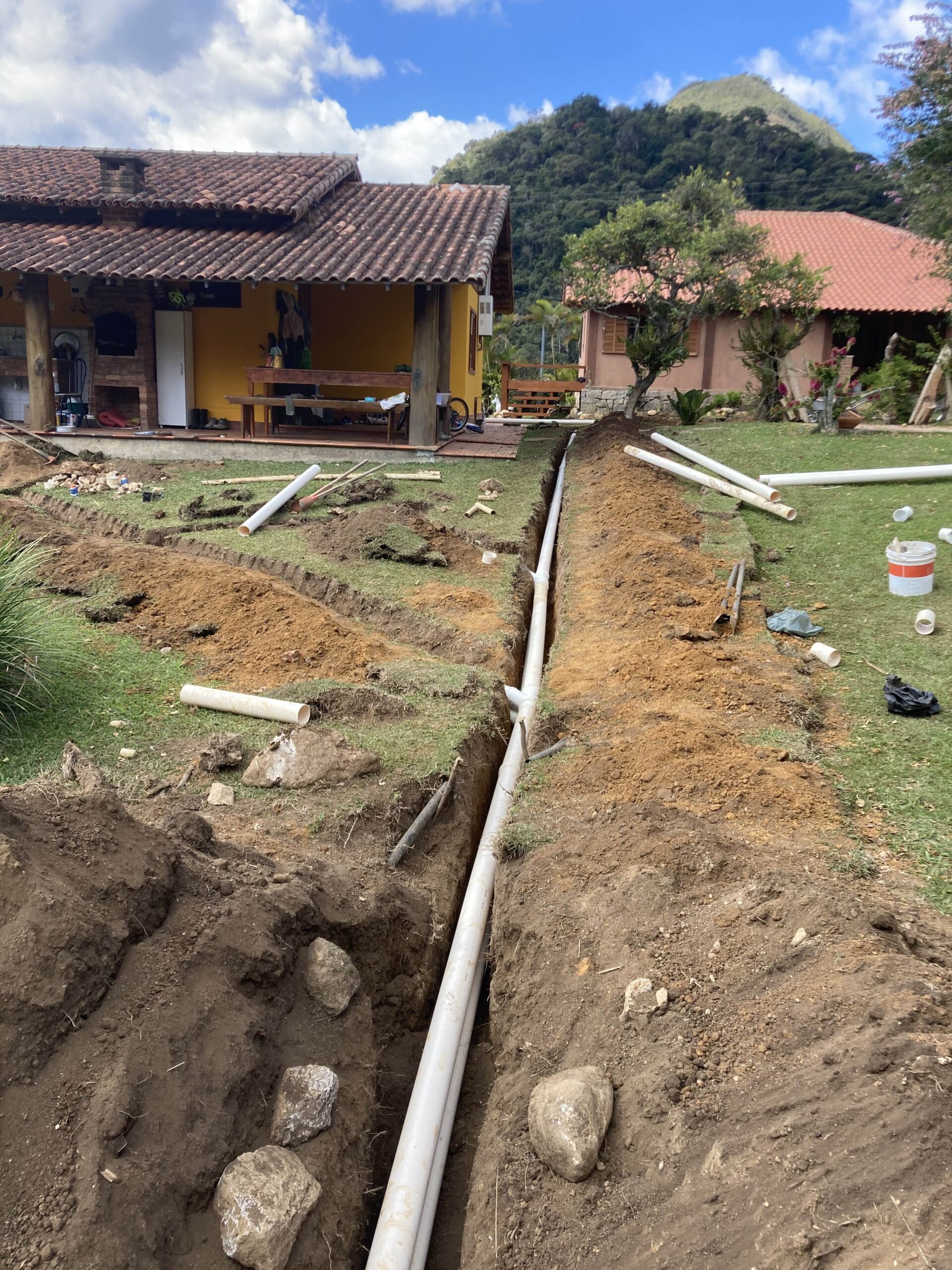 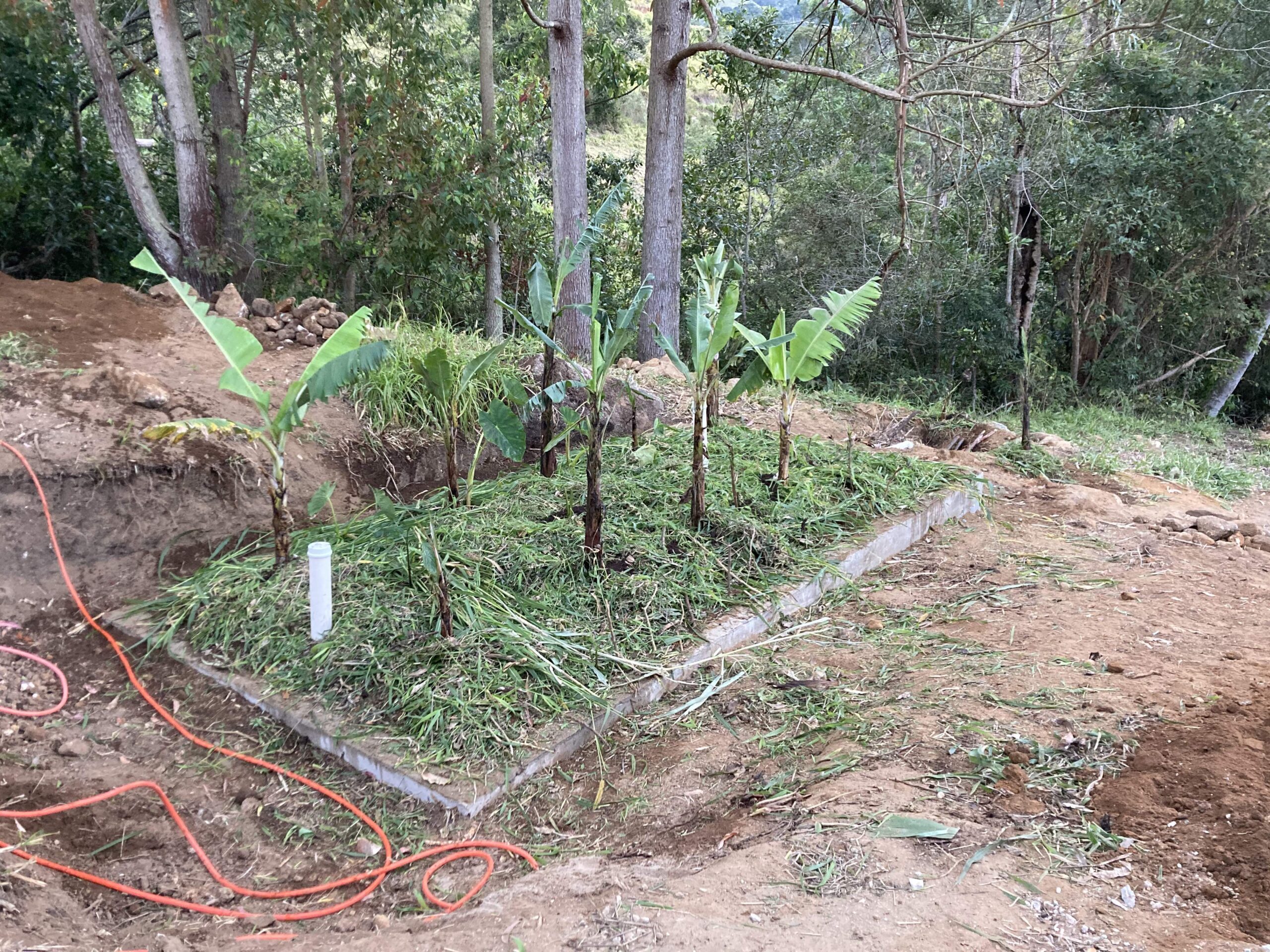 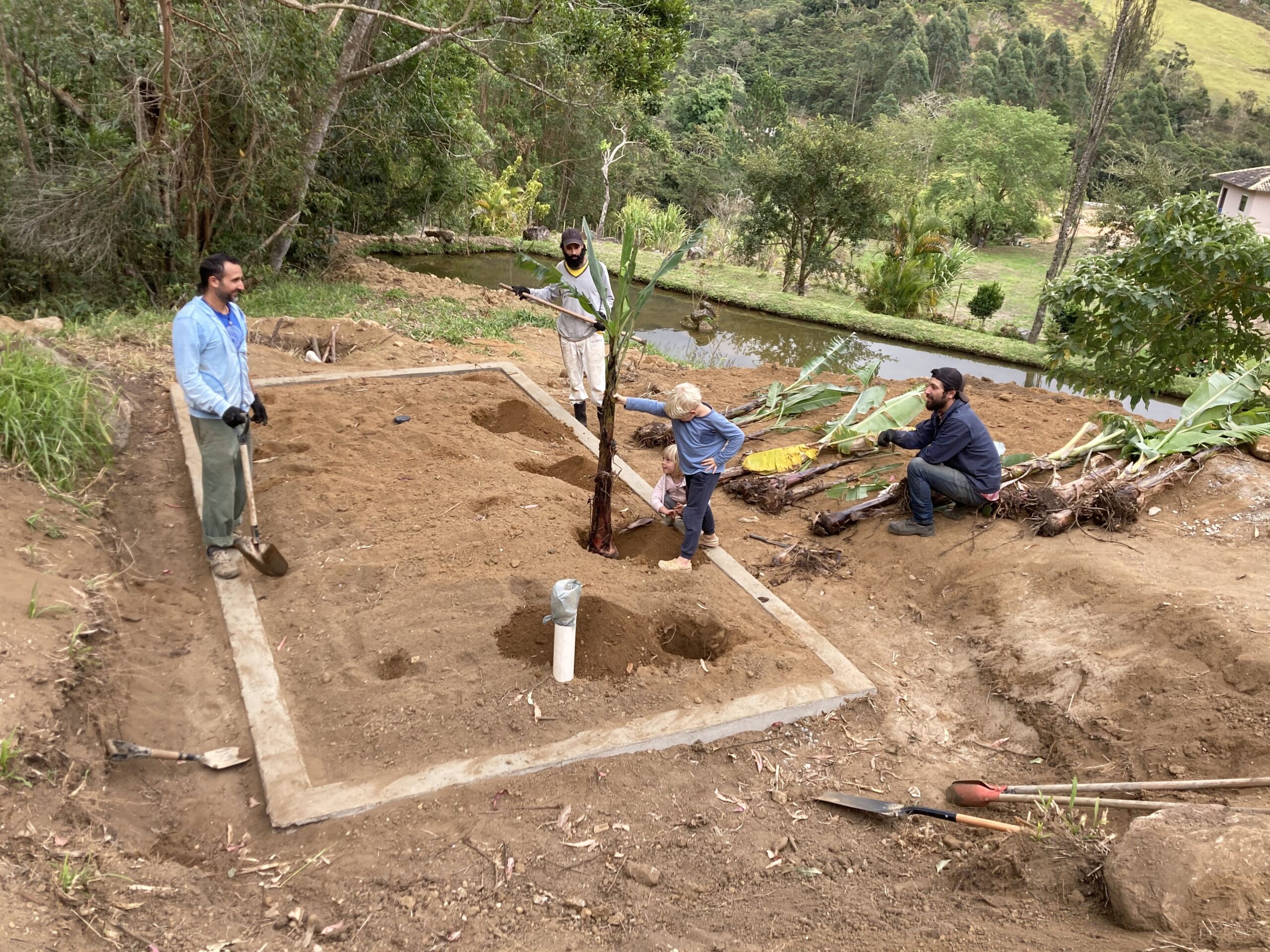 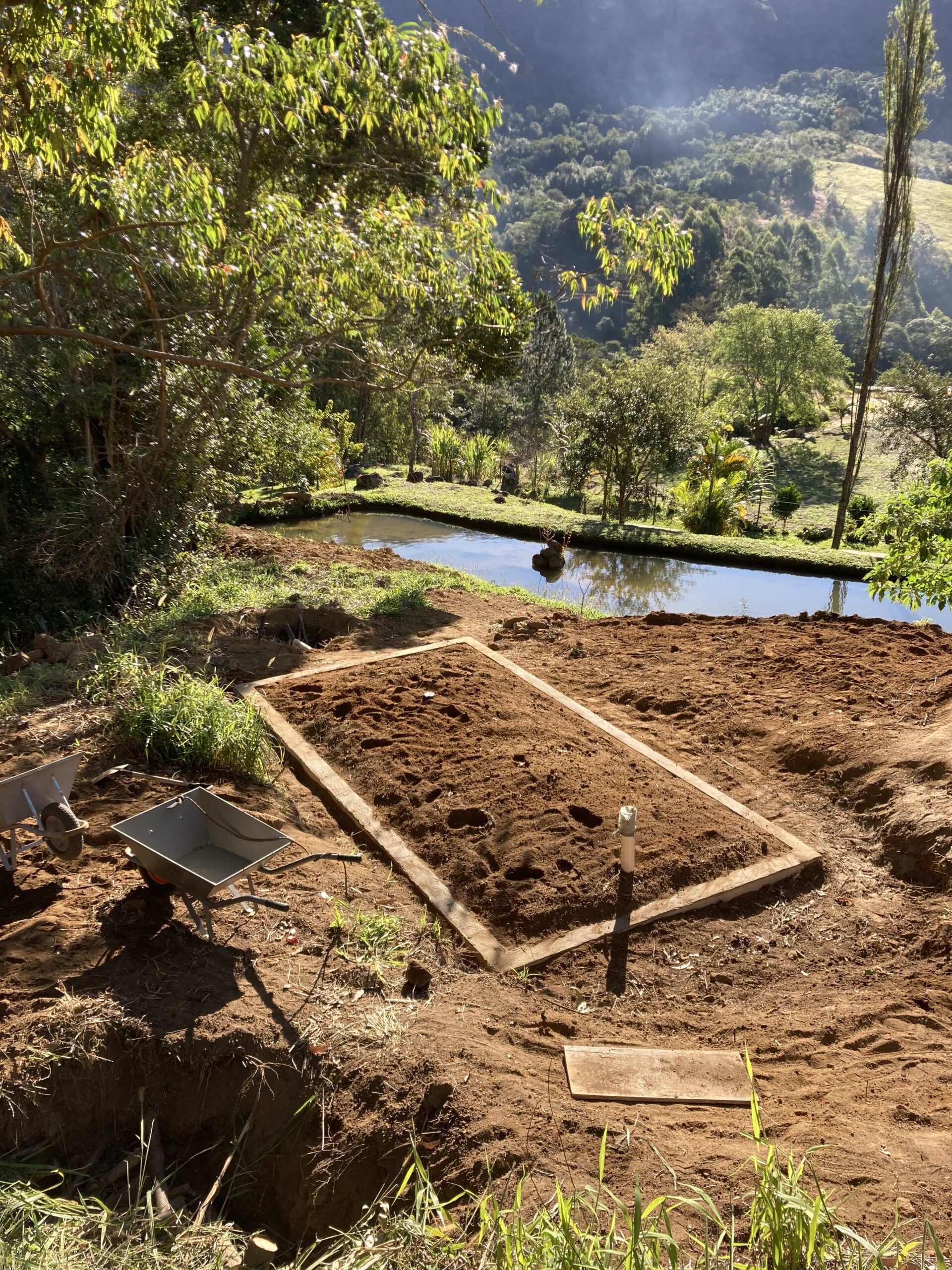 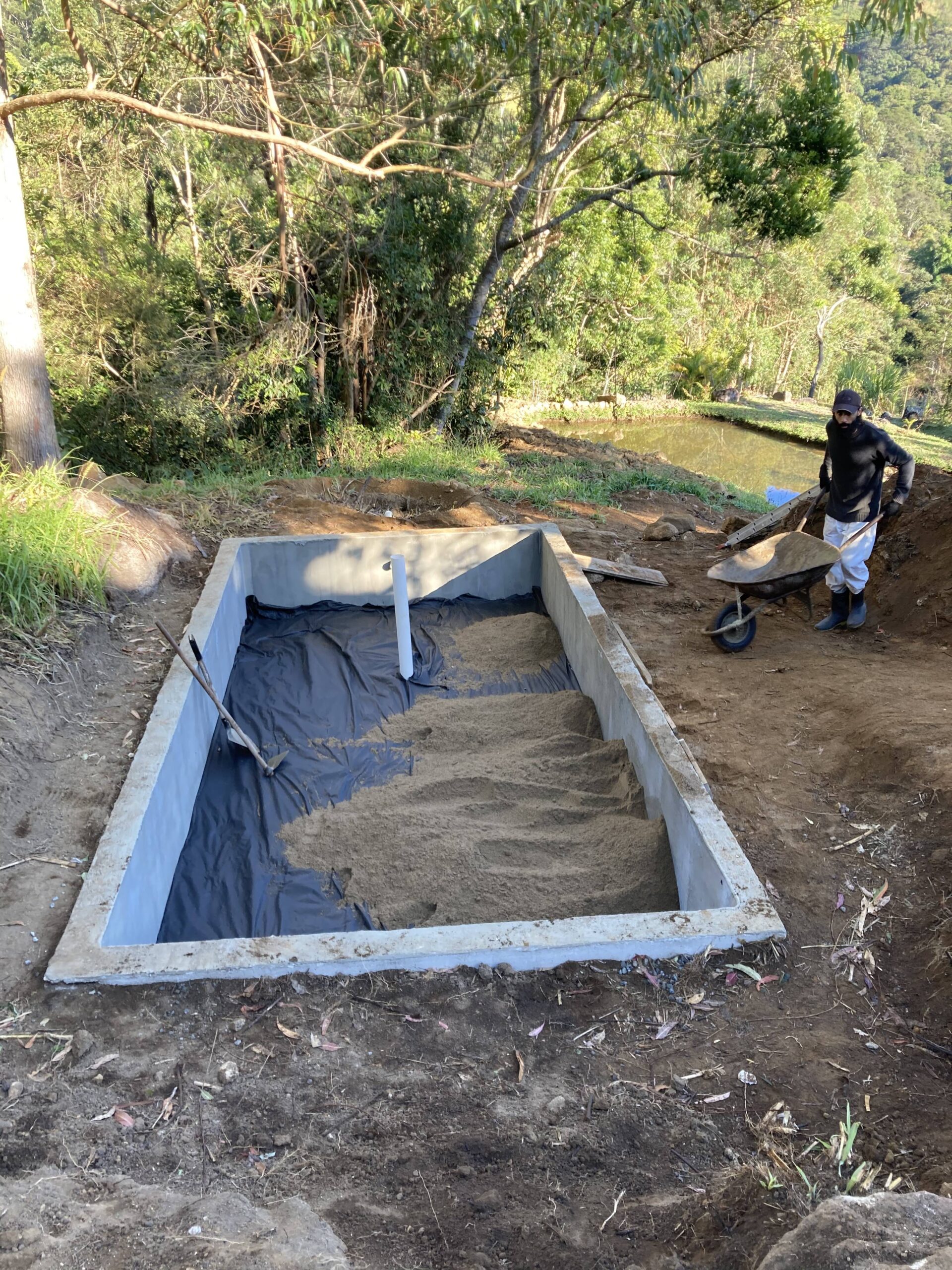 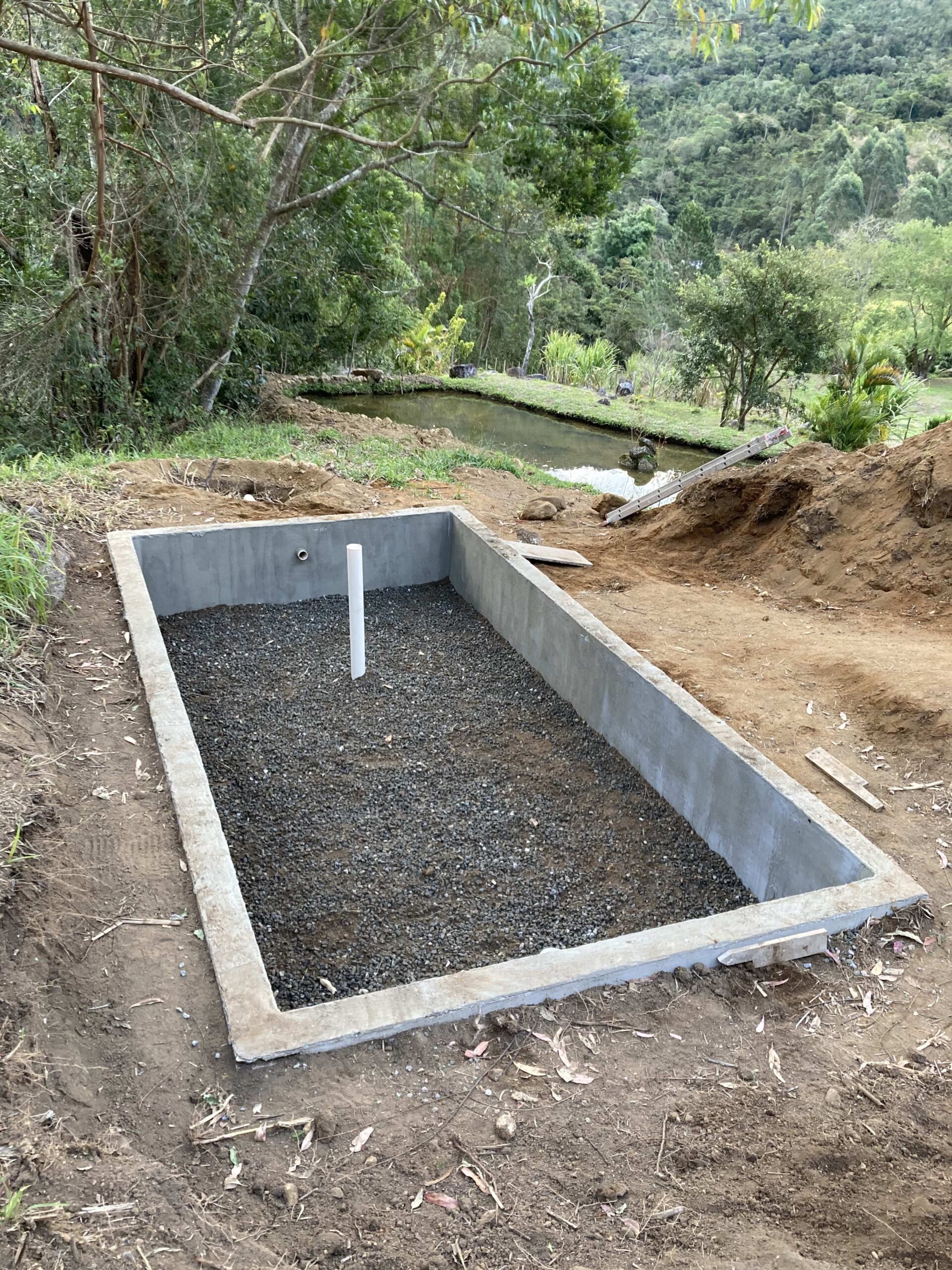 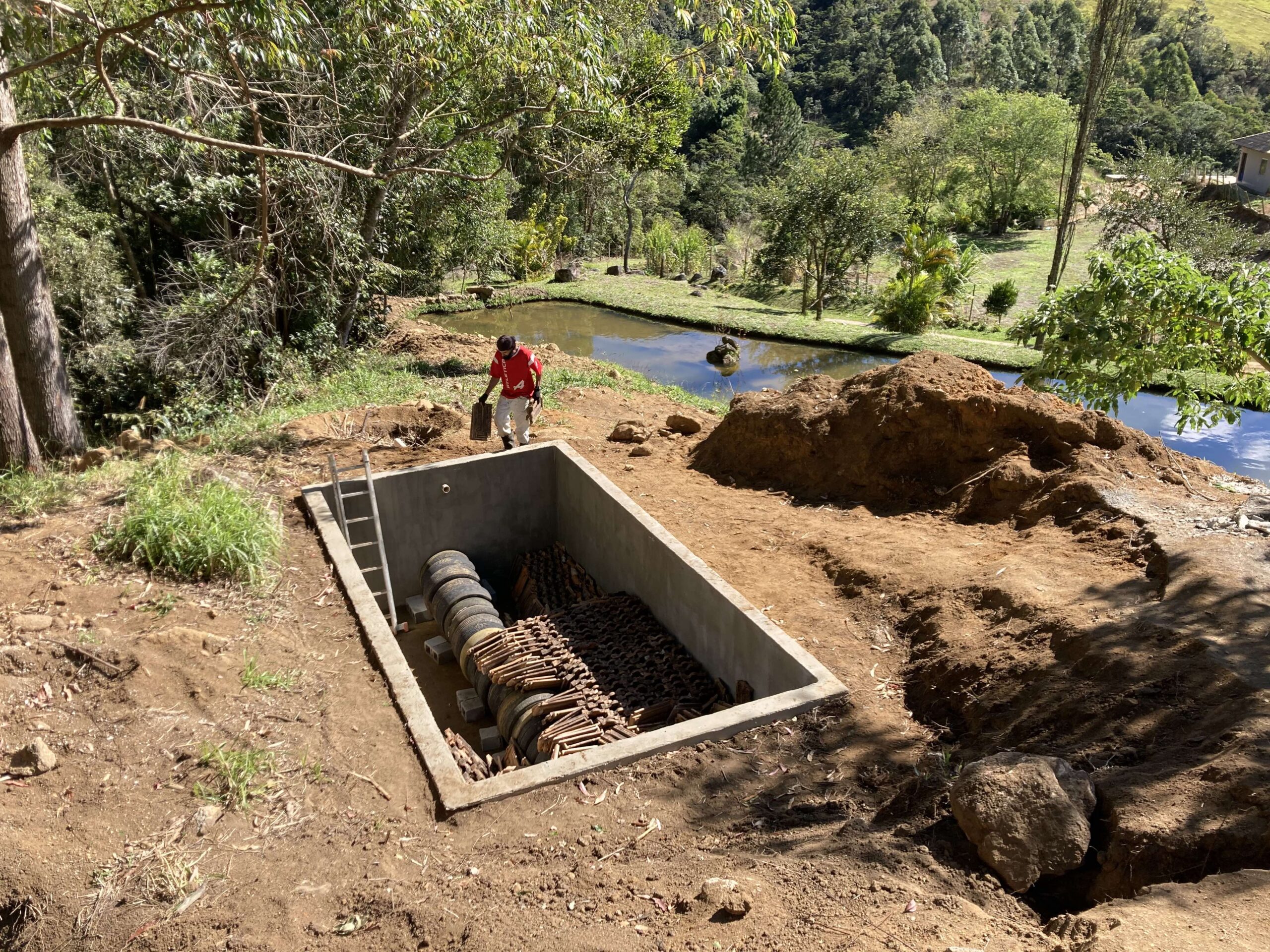 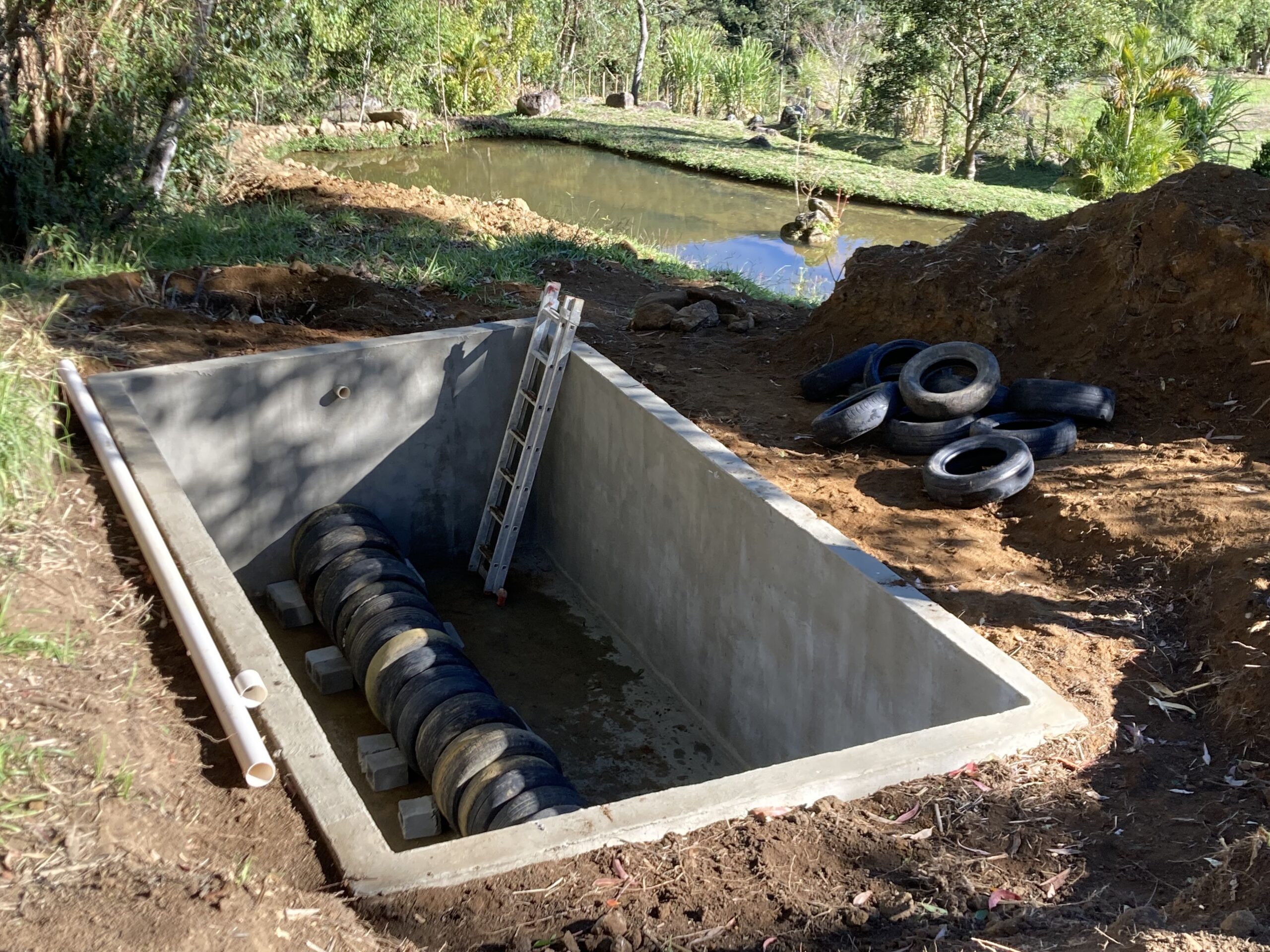 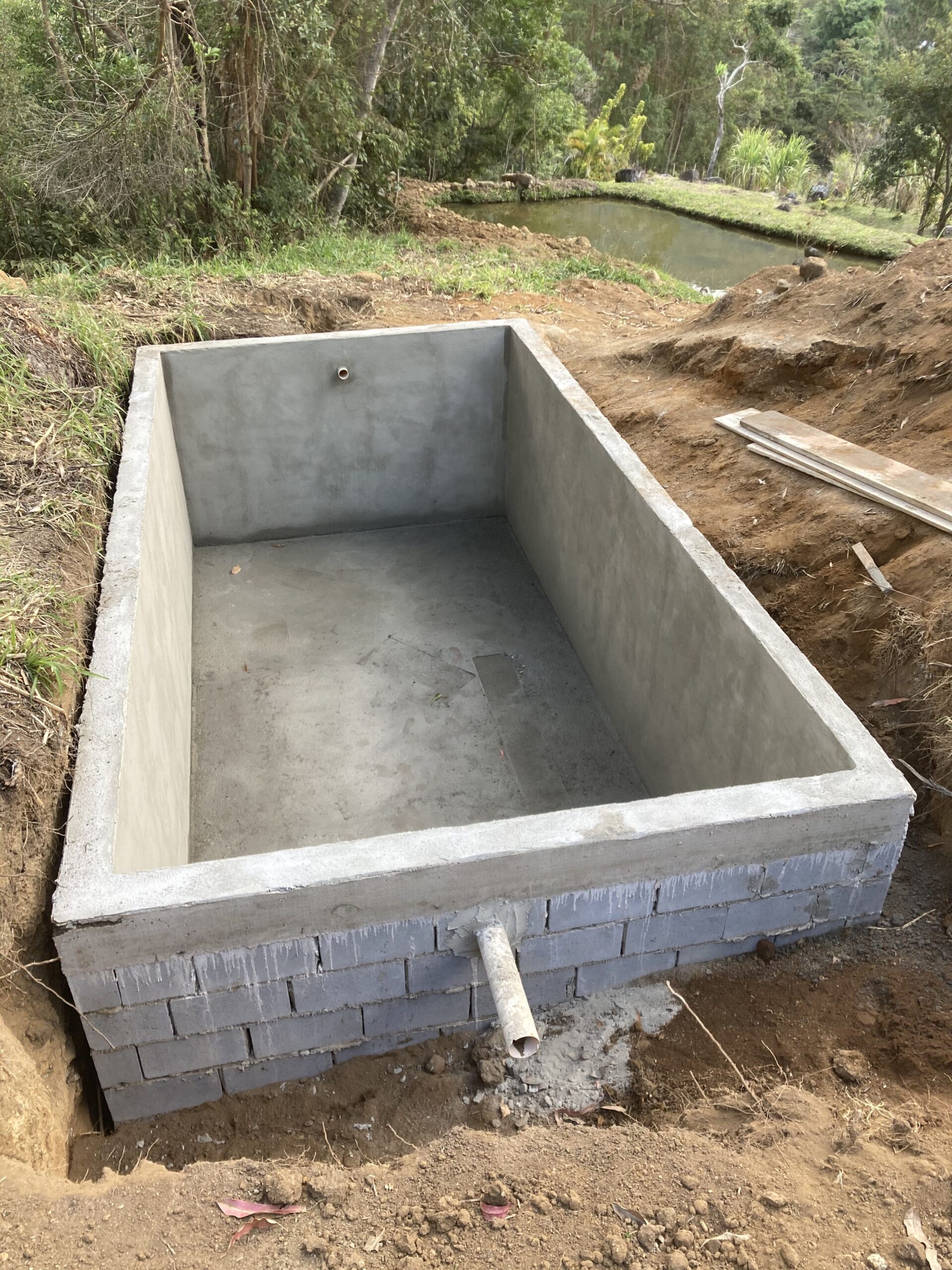 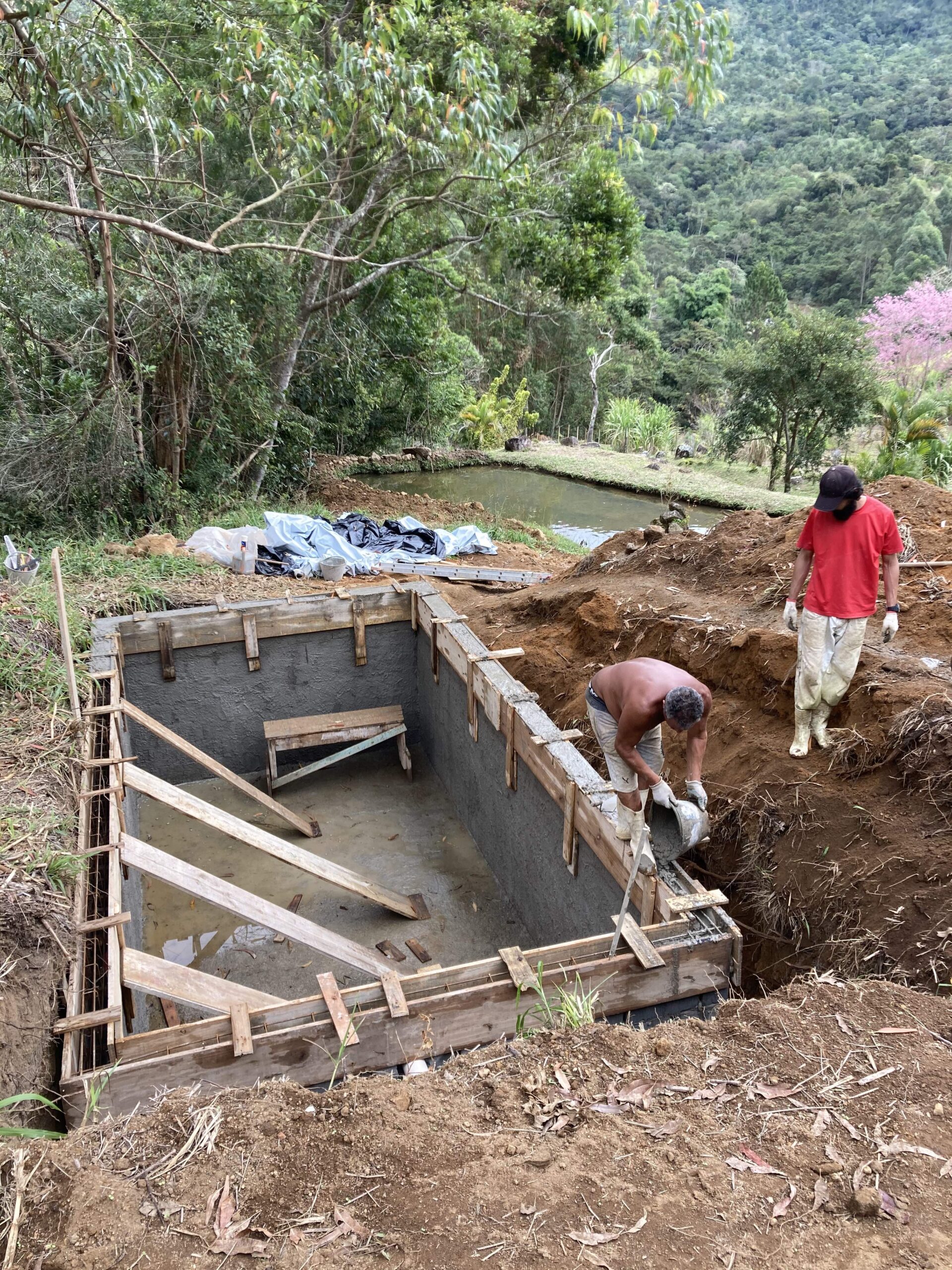 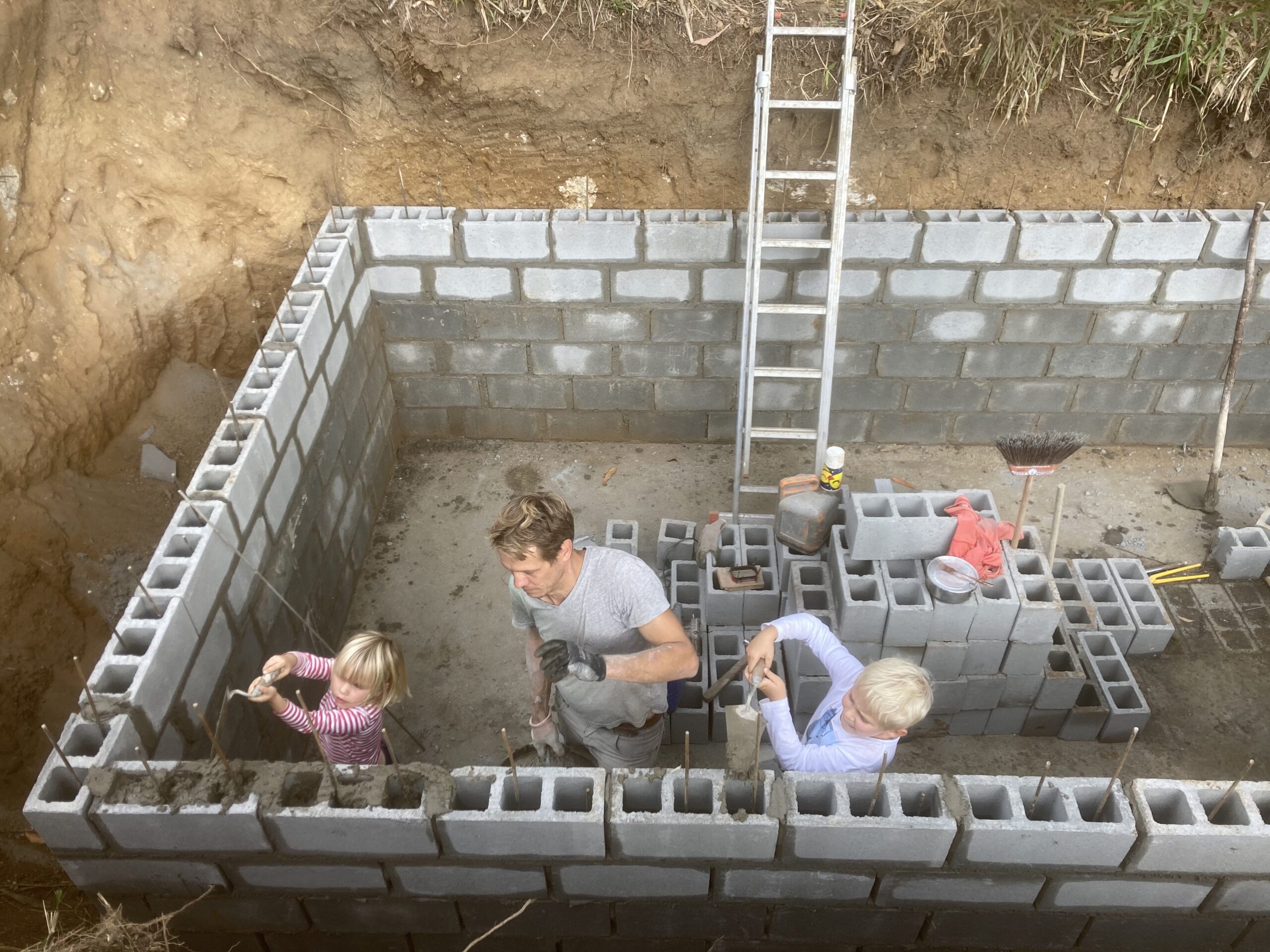 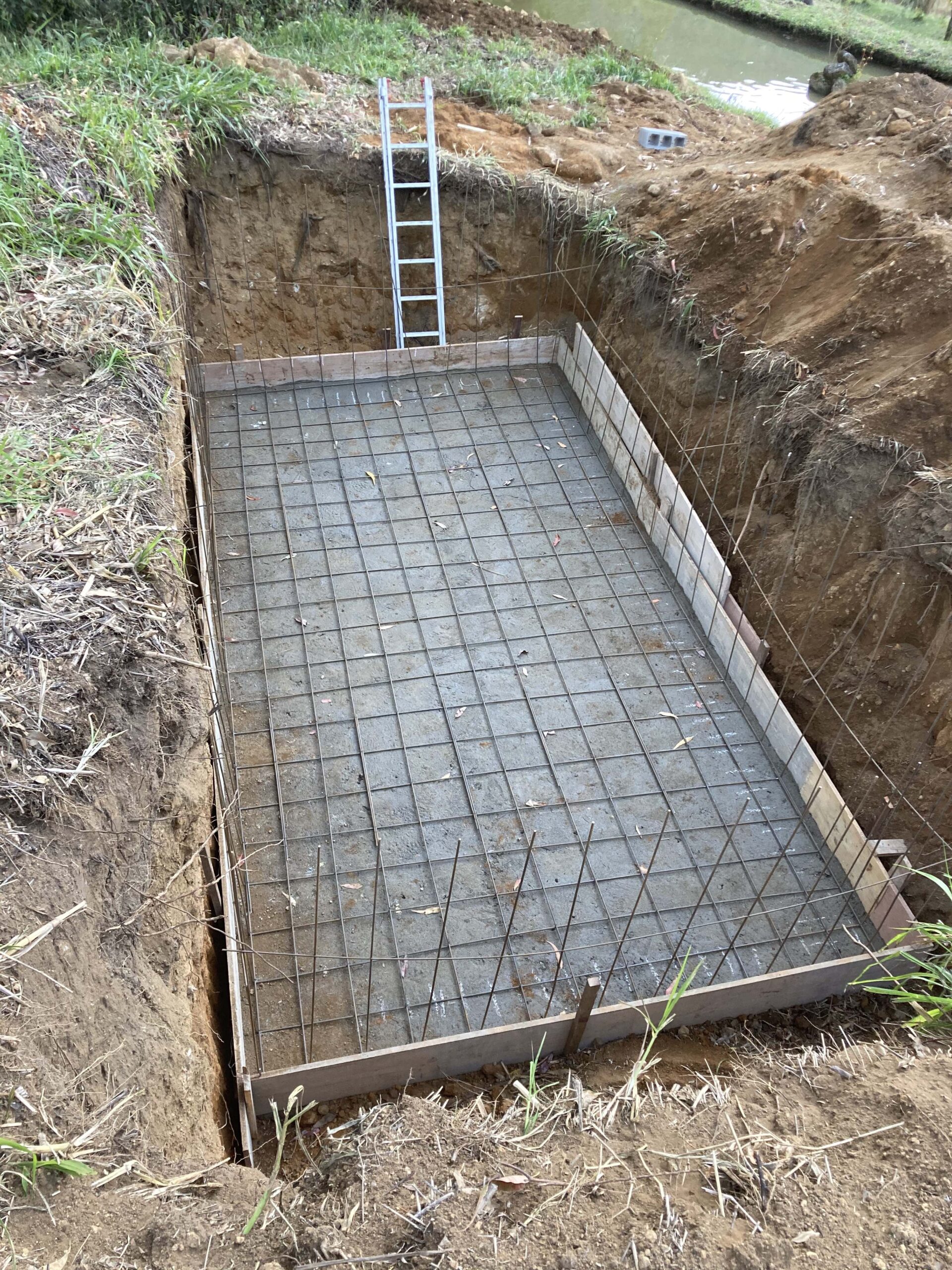 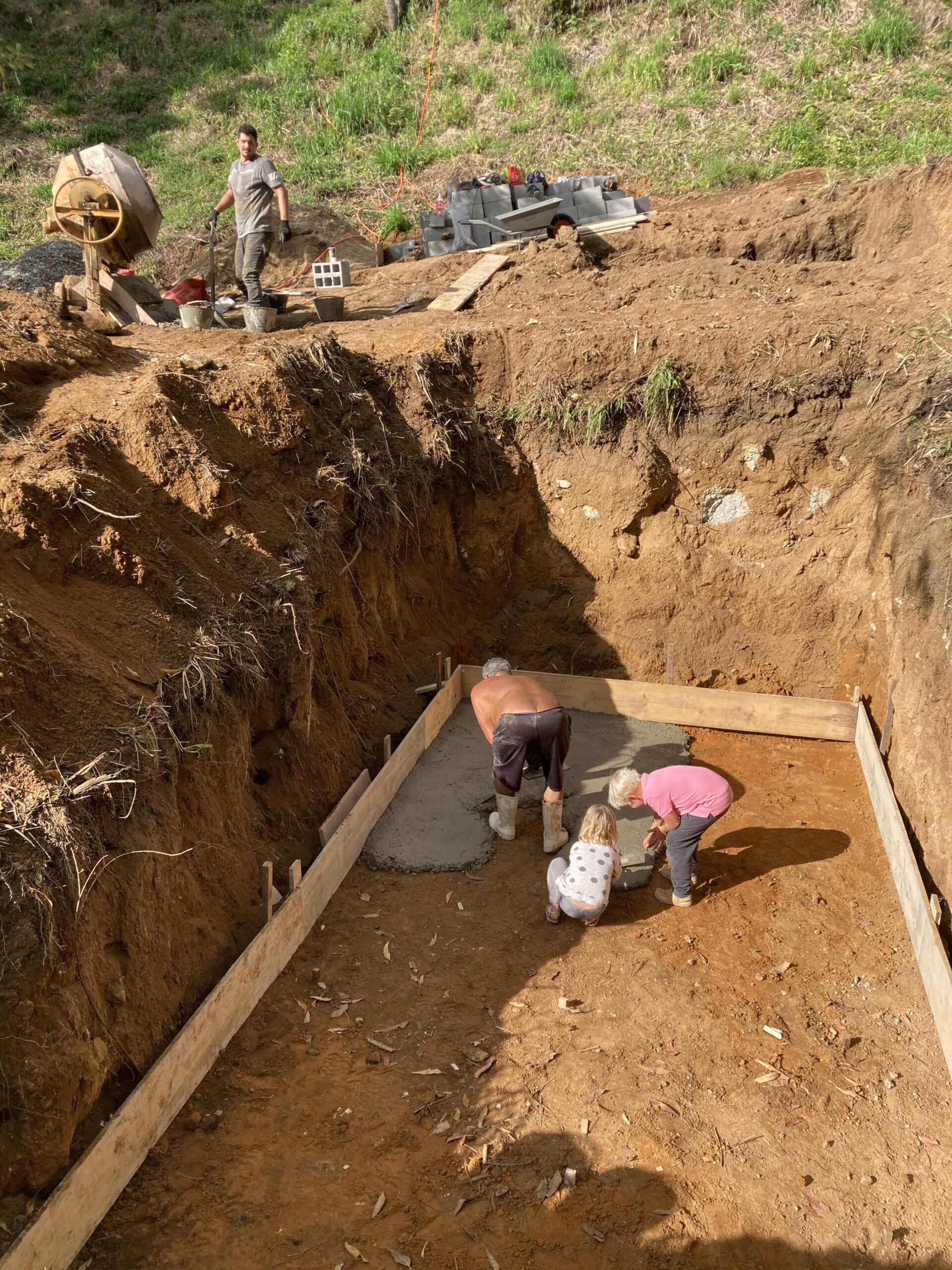